Comic Con Palm Springs Review – The Good, The Bad, and the Ugly 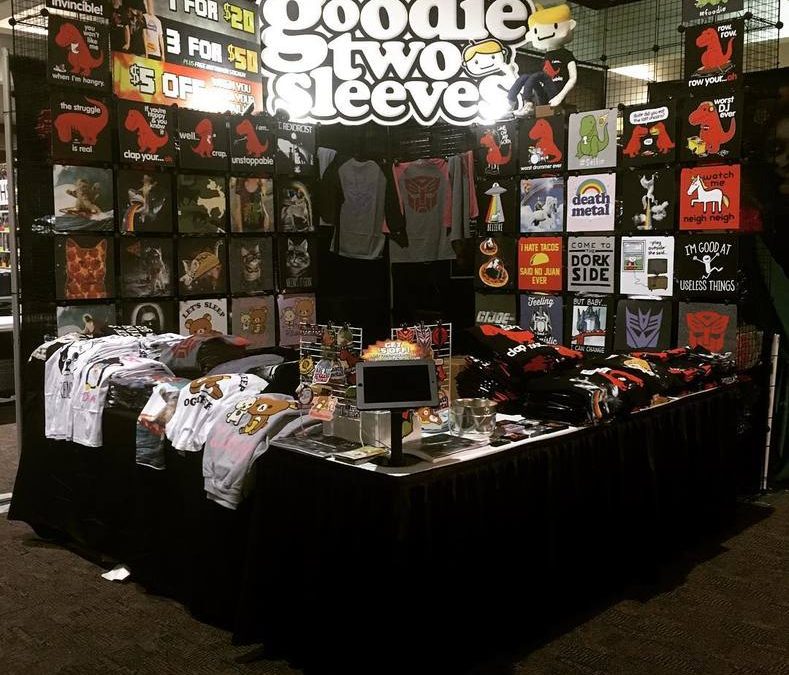 For our own booth, we brought some exclusive items to the show as well as some best sellers at our great comic con prices. We also met some friends, old and new! One of the best parts was meeting Lou Ferrigno and meeting so many of our fans!

A standard Comic Con Palm Springs review may focus on the visitor perspective, but we have the unique opportunity to also give the exhibitor perspective. While the show didn’t have nearly as many exhibitors as some other California shows, the quality of these booths was excellent! From products to artists and everything in between, we were able to pick up some Lego Minifigures, brand new t-shirts, autographs, and more. In fact, because of the concentrated quality, we were able to do MORE than we normally can at other shows.

The guests were on point. We met tons of celebrities, including Stan Lee, Lou Ferrigno, and James Hong. Now, I know these three aren’t A-listers (like the time I met Tom Cruise at San Diego Comic Con), but I was impressed by their attendees considering this is PSCC’s first show. The fact that so many fun guests appeared definitely helped bring credibility to otherwise great show. Also, the fans were AWESOME. In my conversations with those I met, people were hungry for this kind of show in this location. They came out in FORCE and we had an excellent show. The food was alright. That may not sound like a glowing review, but considering the atrocities I’ve had to endure at such staggering prices, the on-site food options were a step above. While they had the usual fare like gut destroying hot dogs, they had healthier options like salads, and… other stuff. I don’t know what it was because I was eating the hot dogs. But I saw they were trying!

The prices were good. Both to attend and to exhibit, it is definitely more value than the cost of admission. As an exhibitor, we got certain perks for free, like getting in, and the official party (which was also great, I might add. I love The Flux Capacitors!) but even the tickets for these things were super affordable.

While the guests were awesome, the panels need some love. Now while I can be honest and say I didn’t actually attend any panels, I definitely saw what they had and spent some time in a panel room. The panel room I was in was something about how to be a better artist, which would have been super interesting, if 1) I had been teaching it, and 2) it hadn’t been cancelled. Yeah. cancelled. They only had a few workshops and panels, and they were cancelling them for indiscernible reasons.

Now here’s where I want to say I was in this room because I decided to teach an impromptu workshop on drawing. Instead the truth is this class may have been cancelled due to poor attendance because I only entered this room to take a nap. But it was a glorious nap.

It’s. Too. Hot. There I said it. Palm Springs in the Summer is hot. Case closed. Checkmate atheists. But really, when you’re setting up a booth and the show’s organizers decide to save a few bucks by NOT running the air conditioner, I have a problem with that. When we go to trade shows in Las Vegas, they often employ the same tactic, however those convention centers must be better insulated because HOT SWEATY MERCIFUL CTHULHU was it hot in Palm Springs. The hottest I’ve ever been setting up for a show.

To piggyback on this last point, the set up time offered to exhibitors was crazy short. Our booth isn’t elaborate, but it takes more than two hours to get it looking nice. Fortunately they extended this by a little bit, but you’ve got to treat your exhibitors nice if you want them to return. Thankfully the staff WAS super helpful and nice, so this last point is bitter sweet.

If you’re in the middle-of-the-desert area next year, make it a point to attend. If you have a nerdy business in California or Arizona, sign up. Either way, stop by and say hello! We’ll definitely be there and it’s sure to be a bigger and better experience. Next year we;ll have a better Comic Con Palm Springs review up so we can hopefully see what the long term trend of this great new show will be!