How To Make A Funny T-Shirt: Clap Your Oh 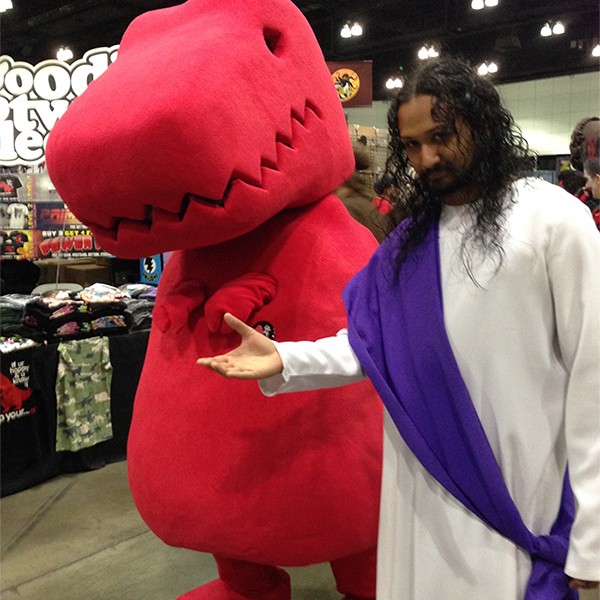 I’ve never sat down to think about how to make a funny t-shirt. It’s kind of what we do everyday. But it’s been an amazing exercise to revisit the birth of one of our best selling designs, The Sad T Rex aka Big Red.

A few days before Christmas in 2009, I was killing time while waiting to see my dad. I brought along a notebook and sharpie and I was trying my hand at “messy-on-purpose.” What resulted were a few pages of nonsense, and a Brontosaurus that looked pretty great. After a nice visit with my pops, I went back to the office and played around with a few food ideas so the image would have a purpose. Vegetarianism is nothing new, but it was seeing a slight boost at the time and a design stuck. Shortly thereafter I made a companion design for the decidedly non-vegetarians we served as our customers. We started selling ‘Vegetarian’ and ‘Carnivore’ designs before the year’s end. What we did not expect was for Vegetarian to take off like it did. In a few short months this design was being carried in multiple major retailers across the US as well as Disney World. This simple doodle had become, for the time being, our best selling style. Carnivore didn’t fare as well. This awkward, florescent T. rex tee did well enough, but never equaled his vegetable eating counterpart. We slowly phased out our Carnivore design while we continued to sling Vegetarian tees. For what it’s worth, that Carnivore design wasn’t a very good example of how to make a funny t-shirt.

A little over a year and several thousand t-shirts later, we felt like our favorite blue Brontosaurus was getting lonely and it was time we made another friend for him. Having felt like Carnivore was a missed opportunity, I played around with another T. rex design. Stylistically, we were looking for something similar to Vegetarian. It was “messy-on-purpose” so I drew a very simple Tyrannosaurus rex to match. I was tempted at first to repeat the same joke, but we had noticed that Vegetarianism’s spotlight was dimming and it was time for something else. A T Rex is Born

I had seen the hilarious T. rex on Meet The Robinsons as well as a drawing of a T. rex trying to paint a house by the wonderful Hugh Murphy, and knew there was something new and funny in the plight of his tiny arms. Later that same week I colored the dinosaur red, and decided upon a play on a timeless children’s song as the content. It had taken a bit of trial and error, but once I started thinking of songs having to do with hands, the joke practically wrote itself. On April 29, 2011 I put the finishing touches on our 2,339th design, “If you’re happy and you know it, clap your… oh” with big hopes. Too bad nobody cared at the time. The design came and went, as so many do. As much as we loved the design, a lot of what we manufacture is decided by our wholesale customers. We had ‘gone to print’ on several other dinosaur designs as evidenced by browsing that year’s photo shoot, but ‘Sad T Rex’ was painfully absent. As it turns out, someone did order it in July of that year, but only as a 1″ button.

Big Red, as we had come to know him, seemed become one of thousands of good-but-forgotten designs we’ve made over the years. That is, until we checked online almost 2 full year’s after having creating the Vegetarian inspiration.

Reddit.com is a great site to get news, see new things, and generally waste time. On the morning of November 9, 2011 that’s what we were doing when one of the top posts was a grainy photo of our Sad T Rex button we had sold to Hot Topic earlier that year. More than simply being really, really cool, we realized that a lot of people were seeing this design. More than 1.1 million people that morning, to be precise. And the comments proved a lot of people were looking for where to buy it. It didn’t take long for us to decide we’d probably want to print some t-shirts of our now ‘internet famous’ design, and a month and a half later we had rushed t-shirts into Hot Topic exclusively. Why Did It Work?

We can’t tell precisely what made Big Red such a hit with so many people, except that it’s funny, and cute, and real. We’d taken a song that everyone knows and twisted the punchline to surprise people. The drawing isn’t our best work, but it was still carefully crafted to evoke sympathy while feeling strangely familiar. And I think we also happened to be really fortunate to have worked with such great people at the time to make it all work.

As it was, sales for Sad T Rex grew over time. Retailers started carrying it, tons of people copied it, and we subsequently trademarked it. The most flagrant infringements removed. And to top it off, eventually Disney World replaced our Vegetarian design with the now requested Big Red. While 2012 was a big year for Goodie Two Sleeves, it was an even bigger year for this new, red dinosaur.

This time marked a turning point in Big Red’s story. We knew we had to not only exploit the problem we’d given him (that of having remarkably short hands), but solve it as well. For these reasons we ended up creating many designs that would immortalize Big Red. These would include Well Crap, Unstoppable, and dozens more.

Big Red had outsold our weird cat shirts, our text tees, and humor tees without much effort. It spawned a franchise of other designs and products bearing his likeness. Big Red spread slowly across the globe until stores from UK to Japan carried him.

Since Goodie began our icon has been a little block-headed boy named Chester. Chester is a reference to a personal story only a few people know. We couldn’t overlook however, the giant elephant-esque dinosaur in the room. While we’ve kept Chester as our brand icon, Big Red clearly had to become our mascot. So we decided to make a seven foot tall costume to use at events like Comic Con. We shared that creation process with 250K of our closest friends. How To Make A Funny T-Shirt

Part of Goodie’s appeal is our variety. We make tons of funny, outlandish designs for a broad demographic. Additionally, we have an incredible licensing program that has carried Goodie into retailers it otherwise would not have entered alone. We have several lucrative private label programs with superb brands, and a few side projects to top it all off. But Goodie’s success, or an important part of it, can be attributed to one sad dino. While Big Red did not define Goodie Two Sleeves, he grew the company for more than a year. He helped us reach all of these ambitious accomplishments. Not to mention the fact that we still carry Big Red on a number of styles today.

But we’ll save those designs and stories for Part 2. 😉